Where Does Federal Government Revenue Come From? 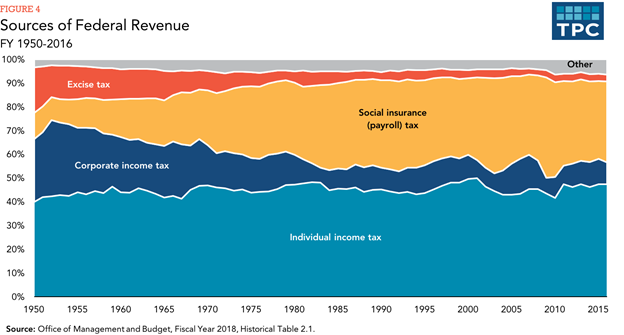 During fiscal year 2016, the U.S. federal government collected $3.3 trillion in revenue. To put that amount of money into context, a stack of $100 bills consisting of $3.3 trillion would be over two thousand miles high—or eight times higher than the international space station. While most people know this money is collected through some sort of tax, many are not aware of the revenue share that certain types of taxes are responsible for.

Below are the four largest revenue sources for the U.S. government:

1.) Income Tax: This is a tax levied onto people based off their income. Depending on compensation level, Americans can fork over anywhere between 10 and 40 percent of their wages to Uncle Sam. These rates can also include small business owners who structure their businesses as “pass-through” entities—which includes s-corps, partnerships, or sole-proprietorships—because the business’s income is passed onto the owner’s tax sheet. All-in-all, this tax makes up 47.3 percent of government revenue—the largest share of any tax.

2.) Payroll Tax: These are the taxes taken out of your weekly earnings—with the deduction labeled as FICA, or the Federal Insurance Contributions Act. This money goes towards government programs like Social Security and Medicare—taking 6.2 percent and 1.45 percent of income respectively. These payroll taxes account for 34.1 percent of federal revenue.

3.) Corporate Income Tax: This tax is imposed on the country’s corporations, such as Apple, Microsoft, or Amazon. These rates can vary between 15 and 35 percent—making it very likely that these large corporations are subject to a lower top tax rate than many small business entrepreneurs. The revenue generation from this tax isn’t as high as you might think. It only accounts for 9.2 percent of the federal government’s revenue.

4.) Excise Tax: These are taxes that are slapped onto everyday products—such as tobacco, alcohol, gasoline, and even airline tickets. Sometimes these taxes are imposed to cover some sort of government regulatory cost associated with the good or service, but many times they are implemented in order to influence consumer behavior. But from a pure dividend angle, these taxes are only responsible for 2.9 percent of federal government revenue.

The next time you go to cash a paycheck, fill out your tax forms, start a business, or fill up your gas tank, remember that the government is taking a significant chunk of your hard earned cash—and many times, it’s way too much. To voice your support for tax cuts, visit TaxCutsNow.com.