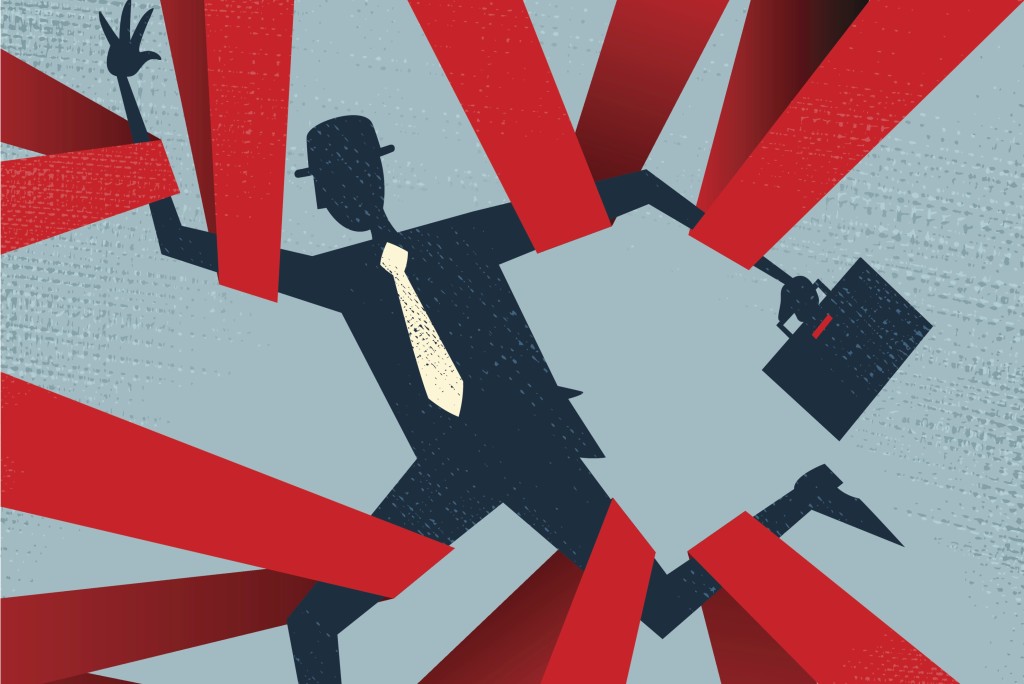 The economy has shown signs of recovery. The unemployment rate sits at 5 percent—almost a full percentage point lower than a year ago—and consumer confidence is looking up. But the labor force participation rate and other economic indicators tell a different story. (Learn more here.)

Here are five reasons why job creators (and the job-seekers depending on them) shouldn’t be so confident about the 2015 that was:

1. Regulations at every turn

American enterprise has never been more regulated than it is now. The Federal Register—which has tracked all federal regulations since 1936—is set to break the record for the most red tape churned out in a single year. Experts project that the journal will publish over 81,400 pages of federal regulations this year, burdening job creators with more paperwork and longer hours filling it all out. For them, it means less autonomy when it comes to doing business. For taxpayers, it means more money coming out of their paychecks—estimates put the cost of government red tape at as much as $2 trillion each year.

One engine of overregulation is the current National Labor Relations Board (NLRB), a federal rule-making agency with an anti-business zeal. In 2015, the NLRB acted on its goal of helping labor unions at the expense of business owners by proposing new rules such as the “joint employer” standard, which would redefine “employer” to include franchisees and franchisors. This would make parent companies liable for labor violations at individual franchises and threaten the franchise model writ large. Minority franchisees make up 20 percent of these businesses, often locating in minority communities and employing minority job-seekers nearby. Another NLRB rule expands collective bargaining as a way to discourage would-be buyers of struggling businesses. They’re all part of a broader effort to riddle the free-market economy with new obstacles.

Looking ahead to 2016, there is no bigger obstacle to job creation than the Affordable Care Act (ACA). Business owners complain that the law’s employer mandate—which requires businesses with 50 or more full-time-equivalent employees to provide health insurance or face stiff penalties—cuts into profit margins and prevents them from hiring more workers. Some are forced to ditch full-timers for part-timers, while others freeze hiring altogether. The nonpartisan Congressional Budget Office now projects that the ACA will cost an equivalent of 2 million full-time positions by 2025. This hurts both job creators hoping to expand their business and job seekers left with even fewer full-time options in the labor market.

While everyone wants to help low-wage workers, “fewer options” is the real consequence of the wage-hiking Fight for $15 movement. Los Angeles, San Francisco, and Seattle are all phasing in a $15 minimum wage, which is forcing employers to cope with higher labor costs. This often makes employees too expensive to employ, denying them the valuable on-the-job skills needed to move up the professional ladder—especially true for restaurants, hotels, and other service providers with smaller profit margins on average. San Francisco, for instance, is already seeing slower job growth in the service sector. And things might get worse: 14 states will see their minimum wage go up at the start of 2016. Those providing (and looking for) work have every right to be nervous.

5. Corporate taxes (still) through the roof

With the going of 2015 went another opportunity for Washington to make America’s tax system more competitive. While the recently signed spending bill alleviated some $600 billion of the tax burden borne by employers and employees, the United States still boasts the highest corporate tax rate in the world—its top rate of 39.1 percent surpasses those of China, Germany, and other global competitors. The higher cost of doing business domestically leads many large corporations—some of America’s most eager employers—to engage in so-called tax inversion in order to remain competitive globally. Using current IRS rules, they can merge with a foreign counterpart and move their headquarters overseas to avoid double taxation and pay a lower rate. This allows them to keep more of their profits and invest in new employees, products, and locations abroad without bearing the brunt of America’s crippling tax code. But it comes at the expense of investment opportunities at home, hampering economic growth.