The Insecurity of Social Security 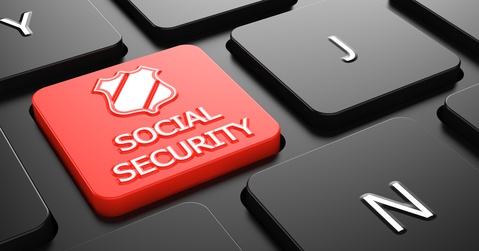 A recent one-day stock market crash is starting up old discussions about how to solve an increasingly urgent problem – Social Security is running out of money.

Here’s how the system is supposed to work:

If you earn $30,000 per year, the federal government takes 6.2 percent – $1,860 – in payroll taxes from you, and another 6.2 percent from your employer and puts it into the Social Security Trust Fund. That money is then paid to retirees based on how much they paid into the system over their working lives.

The idea is that when you retire, enough employers and employees will have paid into the system so you too can collect full Social Security benefits. This has been Social Security’s basic business model for 80 years.

Here’s how the system is not working:

Due to shifting demographics, like too many people retiring, and a declining workforce, not enough money is going into Trust Fund coffers to pay full retiree benefits. In fact, the federal government itself has calculated  money for the federal Social Security will run out in 2034.

This chart from Committee for a Responsible Federal Budget (CRFB) lays out this growing disparity: 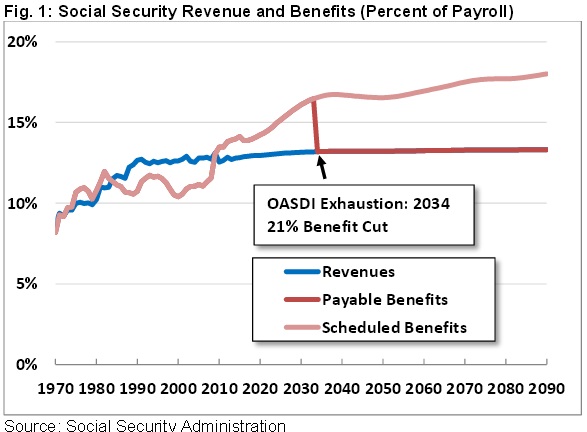 People will still collect Social Security, but they’ll collect less as the years pass, starting with a projected 21 percent across the board in 2034. For example, a $5,000 Social Security check would be reduced to $3,950. As a Cato Institute report explains after that, by law, Social Security benefits will have to be cut by 24 percent.

Politicians and policymakers have been arguing for years about how to fix this problem. The most common ideas have been to raise payroll taxes, eliminate the cap on taxable income, raise the retirement age, decrease benefits or a combination of these.

Another idea that typically gets brushed aside is private investment. Instead of putting all 6.2 percent of payroll taxes into the government trust fund, let younger workers put some of that into private investment funds.

Opponents point to late August when the stock market dipped 1,000 points. They say the markets are too volatile and people could lose too much of their retirement savings. Social Security, on the other hand, invests in government guaranteed securities which is purportedly much safer.

It’s also much less lucrative. Returns on Social Security investment were 2.27 percent in 2014 – a far less rate of return than private investment according to analysts:

“Despite recent declines in the stock market, a worker who had invested privately over the past 40 years would have still earned an average yearly return of 6.85 percent investing in the S&P 500, 3.46 percent from corporate bonds, and 2.44 percent from government bonds.”

The example is a worker who retired in 2011. If she invested half of her Social Security payroll tax, she would retire with more money than with Social Security. And when Social Security recipients die, so do their benefits. Money in private accounts can be passed down to beneficiaries.

A real-life example is the country of Chile which privatized its pension system in 1981.

Chileans chip in 10 percent of their salary, but the money goes into one of several private investment companies. As a New York Times writer discovered when comparing notes with a Chilean friend in 2005, the return is far better in Chile:

Also, the Chilean government will cover a portion of those payouts should the investment company go under.

The bottom line as our policymakers weigh Social Security’s future, allowing worker choice about their hard-earned money should be part of the discussion.